Well, you can’t say I didn’t warn you. The WordPress App is a real bugger to operate and I had to trash the last post as the pictures were too small. Naturally it transpired it was my fault. At some moment in time I’d changed the picture size, then couldn’t find out how to change it back.
Anyway, I think I’d said that this trip has been a photographic smorgasbord, a real feast, and rather than write a lot of guff off said I’d post a few pictures taken thus far. They are not necessarily my favourite shots but are among those I really enjoy.
I did however find it relatively easy to put captions into place and also admitted that I had used what I call the ‘dynamite’ button on the Snapseed App on a few of them. Probably all of them if I think about it.

Markets are always a happy hunting ground for pictures. This was taken in Hoi An, famous for it’s cloth market but in this case I was more interested in the garlic and the knife which had been used by the stall holder for the best part of her life.

I was walking around the back streets of Quy Nhon one night when I looked though the door of what I assumed was an abattoir and saw this cow, I assume it was a cow, who was beyond help. I asked a guy, who happened to be holding a large knife, if he’d mind me taking a picture. I hated to think of the consequence of upsetting him.

And this is The Pearl River

This woman was making fish cutlets while talking with a few customers. One of them was smoking and the smoke drifted into the picture, adding a little extra. Sometimes I like smokers. 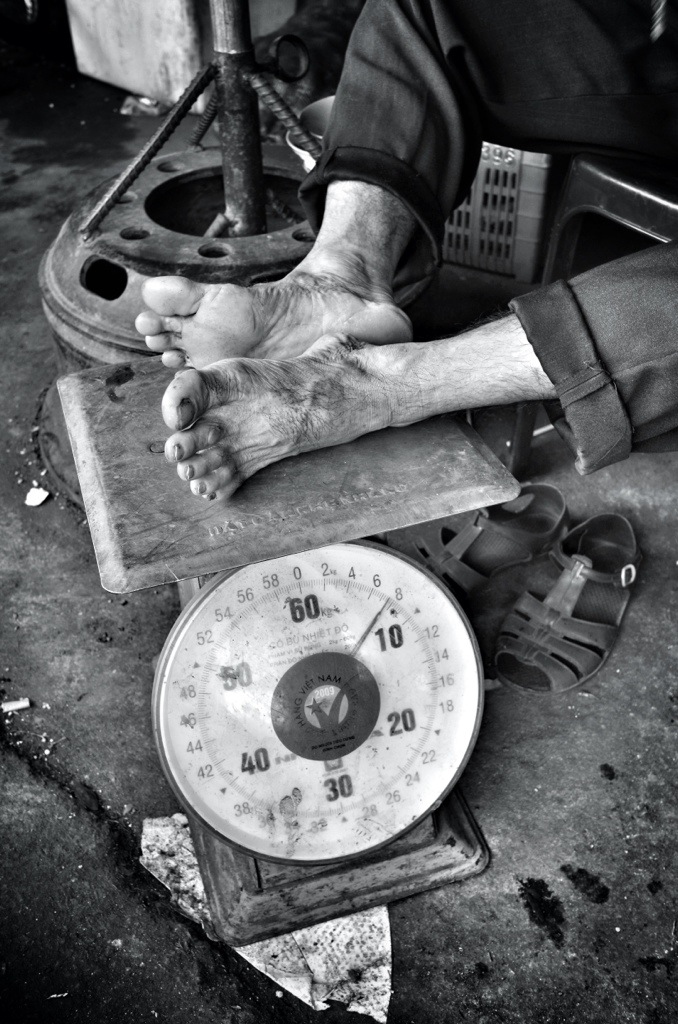 I couldn’t resist this shot. An old fellow was resting beside his market stall and had propped his feet on his scales. After I’d taken the picture I asked if he minded. He was delighted and happily posed for a portrait but it didn’t match this shot.

While speaking of smokers, which I was, this was an offering at a small temple.

Eat your heart out … this is the view from my hotel window in Sapa.
all pictures copyright Roger Garwood 2013

3 thoughts on “At the Top End of The Dragon”